The basics of Affiliate Marketing are relatively easy to grasp. Understanding the structure of an affiliate network, the relationships you form within them and how to optimise campaigns can only be honed once you understand the fundamental framework of how affiliate marketing works.

The 90s brought upon the technological revolution that enjoyed the introduction of a little something we’re all pretty familiar with called the World Wide Web; although still in its infancy, it didn’t take long for a number of businesses to spring up on the platform to highlight their products and services.

The emerging popularity of search engines during the 90s led to mass organization of websites, making the Web a far easier platform to use and navigate and in-turn opened many doors for the standard everyday user. Many websites sprung up which utilised the ability of being found on search engines to provide an audience with a rich array of information; and for parting with their knowledge, in-time they naturally sought some compensation for doing so. Online advertising was then introduced in the basic models of CPM (cost per thousand impressions), CPC (cost per click) and fixed placement. These conventional models soon started seeing competition from more accountable options such as affiliate marketing.

The monetisation of the web was inevitable, and affiliate marketing would fill the void in a way that no other advertising model could. The key function which proved popular was a ‘pay for performance’ aspect which utilised a commission model for proven results.

The model first became popular as mainstream e-commerce in 1994, then in 1996 Amazon was the first big name pioneer who capitalised on its rapid growth as online transactions increased year on year. Greater security, access, convenience and competitive pricing have all lead to an upsurge in the industry that only improved as technology grew alongside it.

Conventional retailers soon realised the number of opportunities which existed online and soon opened online stores to run alongside their physical stores. The value was quickly realised by a number of performance driven industries, who found the low risk commission models as the perfect way to complement their businesses.

Affiliate marketing provided a variety of commission models which allowed a greater implementation across an assortment of web channels as you can now see instances of advertising in web content, email, social media, search engine advertising and much more. The changing nature of the web to providing user-generated content and the rise of the blogger has diversified the way in which people utilise affiliate marketing. Through the introduction of content management systems, email clients and rapid application development tools, they have opened up online opportunities to an array of people who no longer need the technical qualities of an advanced computer programmer.

As practices have evolved even further ‘affiliate marketing’ is now commonly being referred to as ‘performance marketing’ to complement the nature of the pay for performance model.

After operating in affiliate marketing (also known as performance marketing) for quite a while we’ve accrued a knowledge of all the ins and outs of the industry, so we’ll explain a little of how there came to be a need for affiliate marketing, the key cogs that make up a program, the connections to be made within a network and the endless benefits this can make to an online business.

So, what is Affiliate Marketing?

Affiliate marketing is often applauded for its ability to drive sales. Publishers are only paid when a visitor to their site is redirected to an advertiser’s site to then make a sale or takes a path to perform a desired action. This model ensures little to no risk taken by the advertiser, while publishers have the freedom to place creatives and utilise a variety of channels of their choice. Traditionally CPC (cost per click) and CPM (cost per mille) were the formative models of online advertising and was perfectly adequate during the web’s emergence. As online marketers became smarter though, they sought a more accountable approach. Affiliate marketing brought with it the ethos that ensured a benefit from only results and didn’t value interactions which did not lead to conversion.

CPL (cost per lead) is once a publisher’s site visitor is referred to an advertiser, then enters and submits their personal details. This qualifies as a lead. For example, a visitor browsing a publishers website, clicks on an ad and then submits their details on the advertiser’s site. A commission is then rewarded to the original publishing website.

The key trait of the advertiser is that they host the webshop which provides goods and/or services, and is seeking to host their advertisements on other sites. They provide the creatives for publishers to place on their sites for audiences to interact with, and then travel through to their own webshop with aim of transactional growth.

Can be an individual or a company which promotes an advertiser’s product or service on their website to earn a commission. Once an advertiser has chosen to work with a publisher, they are then granted access to all the advertisers’ creatives which they can then integrate with their content regardless of the channels preferred, even including offline.

A visitor who navigates down a segmented path and fulfills objectives at each stage. After clicking a creative on a publisher’s channel, they are then transferred to the advertiser’s site where they fulfil a desired action. Most commonly the action will involve making a purchase or completing a form.

The intermediary facilitating the relationship between advertisers and publishers. They provide the meeting place for both, and enable them to access and post the creatives they need. This is the role of TradeTracker, who provide the leading abilities for clients to optimise their online advertising. We handle the fundamentals such tracking transactions and as pay-outs, but also extend to offering advanced insights and an account management service to help achieve the perfect approach to your affiliate marketing.

The Nature of a Publisher and Advertiser Relationship

The performance model fosters a mutual benefit when both parties succeed. It is in the best interest of the advertiser to see the publisher perform well, and vice-versa. Therefore, it is important that there is an open and honest relationship between the two with an emphasis on collaboration

A level of transparency should be maintained through all interactions, as an upfront approach goes a long way to building viable relationships with publishers. Publishers can feel comfortable knowing they are receiving a humble slice of the pie and not being taken advantage of.

Advertisers should be flexible and listen to any suggestions that their publishers have to offer, as some of the best ideas can come from those who are on the front line. Publishers shouldn’t be treated holistically but individually or organised into segments for a more targeted approach – an extension of your salesforce.

Through following the insights accumulated over time, both parties are consistently evolving their approach to dive into new opportunities and any trends which are being observed. A campaign is never set in stone and should be evolving over time following the process of ‘testing, evaluation and optimisation’.

There is a number of benefits which can differ depending on the affiliate marketing approach you wish to take. However, there does exist a few which you can be utilised no matter the campaign you employ.

Setup is easy and just takes a moment of your time. As a new and valued customer you’re assured of qualified guidance throughout the implementation process. Our goal is to get you started with confidence.

There’s no limit to the number of ways you can implement a campaign. Combining different channels from content sites, to social media and even hybrid models. Armed with so many options and evolving technology, there’s always a path ready to be explored.

Hone your skills within one field, then apply them in multiple ways. There’s a huge collection of ways in which campaigns can be employed, so there’s an endless number of pathways to making an income

In the eyes of an advertiser, the benefits include the targeted traffic of a relevant audience, an ability to utilise a virtual sales force of affiliates and the optimal return on investment as they only pay once desired results are achieved. For publishers, it’s a simple story of flexibility. They have complete freedom to choose the channel which works best in approaching their audience and can experiment with a variety of advertisers, creatives and their own content to hone their plan of attack.

There is no other approach to online advertising that is so focused on ensuring results than affiliate marketing and at TradeTracker our aim is ensuring your potential is reached. We offer a completely transparent platform, optimisation of results, and collaborative relationships; all while utilising the leading technology in the market. We cater to both advertisers and publishers, valuing both equally as key components to compiling the most credible network online. Now you’re equipped with a basic understanding of affiliate marketing you’re ready to become a TradeTracker advertiser or publisher! If you have any further thoughts be sure to drop us a line and we will answer any burning questions!

Ready to Take the Next Step?

We are a team of result driven affiliate junkies, devoted to performance and always looking to make the advertising world a better place. Reach out and learn how we can kick-start your online business. 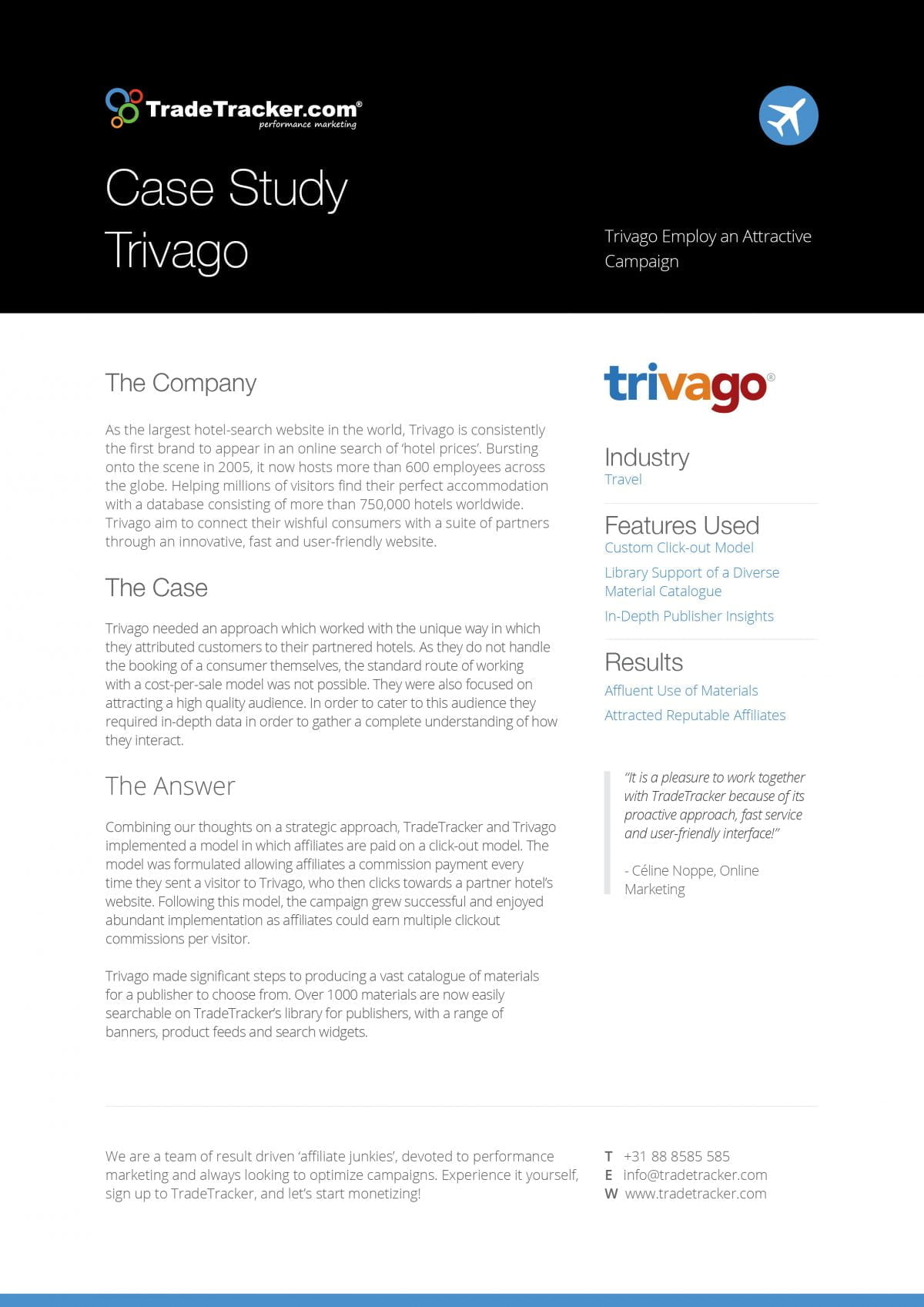 Ecommerce Europe Iab.net We are a member of:
TradeTracker uses first and third party cookies to provide you with a great user experience. By using TradeTracker you accept our use of cookies. For more details about cookies and how to manage them, see our Cookie Policy.