TradeTracker works together with several CSS partners that provide promotions via their own websites, but also bid for shopping ads on Google. This can go hand in hand with your own Google Shopping campaigns and Google never displays the same ad multiple times. If Google determines the same product from the same seller is being uploaded numerous times, then it will only show one ad. The CSS shopping ads (including Google Shopping) will appear in the general Google results. So not to confuse users, the ads must also be displayed on the CSS site that submitted them to Google.

Google chooses which ads to show through what is called a price auction. Often a frequently asked question by advertisers is whether they are bidding against themselves for an offer. This is never the case; Google determines that all CSSs are seen as a single seller and you will never be second-priced against yourself in the auction. If two CSS partners place a bid on behalf of the seller, then the amount would be seen to Google as the same as it is from a single seller perspective.

The advantages of working with CSS partners within the TradeTracker network, is that you do not have to pay for the advertisements yourself. You pay the CSSs partners on a cost per sale basis, but without CSS partners, you would deal directly with Google on a cost per click model thus allowing you to have this activity on a performance-based model with TradeTracker.

You can also set up a blacklist of key phrases you do not want to be associated with or discovered by. These words will explicitly not be allowed to display ads.

The best option for you depends on your business, your goals and the services provided by the CSSs. You can advertise with multiple CSS partners at once, to determine which combination works best for you. Your Account Manager can advise you on this. 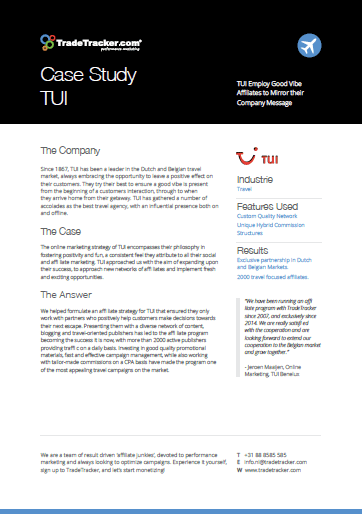